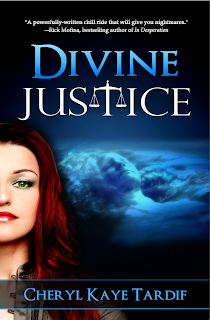 From April 9th to 11th you can get DIVINE JUSTICE FREE in Kindle edition. This is book 2 in the Divine series, my paranormal thriller series starring CFBI agent Jasi McLellan and her covert team of psychic agents.


CFBI agent and Pyro-Psychic Jasi McLellan battles a serious infection that threatens to claim her life. Slipping in and out of consciousness, she remembers the Parliament Murders...

Get your free copy today!

I recommend you read DIVINE INTERVENTION first as this IS a series. And it's only $2.99.
Posted by Cheryl Tardif at 7:00 AM