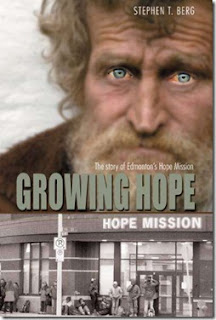 Growing Hope is published by Guardian Books, a division of Essence Publishing. Copies can be ordered from http://www.essencebookstore.com.

While most of us are writing about fictional crime, many of us have experienced it. Some of us are survivors of terrible tragedies. I am tied to Hope Mission in a very personal way. My younger brother used their services before he was murdered in 2006. I was honoured beyond words to be asked to edit this book and did so willingly. Some of the stories presented in Growing Hope brought me to tears. Some could have easily been my brother's story.

I hope you'll check out this book and read it. For those of you who are researching life on the street for a story, this book may be quite valuable. For those of you who don't know much about the homeless, addicted or poverty stricken members of your community, this may help you understand more, maybe see a different side. It is such a comfort to me to know that my brother had these services and these people in his life.

To learn more about Growing Hope, please check out:
http://hopemission.blogspot.com/

I was recently interviewed by Anthony Bidulka, author, interviewer and possibly professional stalker, and this interview wasn't your normal run-of-the-papermill type. Instead of asking me those questions I usually always get during interviews or ones I've answered a million times, he tried a more...um...unique approach.

So here it is, folks! The complete list of...

Authors, check your books on Amazon for unauthorized Kindle editions 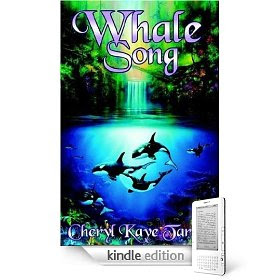 I spent the past two days speaking with a representative of Trafford.com, the publisher of the original 2003 novel Whale Song, about how the old edition could have mysteriously been converted to a Kindle version without my authorization--or Trafford's.

Let me start from the beginning...In 2006 traditional publisher Kunati Books (now closed down) bought the print and digital rights to Whale Song. The older 2003 print edition was removed from Amazon after some time. This was the ONLY edition available at that time; no Kindle version had been created.

Whale Song was then published by Kunati in 2007 as an expanded special edition with new scenes and revised text. Again, no Kindle was created. In mid-2009, after the 2007 edition had gone out of print and Kunati was closed, I discovered there was a Kindle version on Amazon--of the original 2003 edition.

It's a good thing I wasn't with Kunati at the time as most publishers would want the digital rights. I wasn't sure what to make of the old version now in Kindle, so I did what comes naturally--I promoted it. I tweeted about it, feeling happy that Whale Song wasn't completely out of circulation. I get emails every week asking where this novel could be found.

In the back of my mind, something bothered me though. I didn't recall being paid for Kindle sales. However, logic told me that Trafford must have been paying me and that I just hadn't noticed, that somehow when I pulled my title from them back in 2006 they left the Kindle, which may have still been processing.

So new year, new organization hits me. I contacted Trafford and mentioned Whale Song and when they confirmed their records, it was indeed removed from their system and cancelled. They had not authorized a Kindle version. The gal at Trafford contacted someone at Amazon and was told that "the author" had sent in a copyright page with no references to Trafford as the publisher.

I'll admit, part of me felt kind of stupid because I didn't recall doing that. Was I sleep-Kindling? Had I actually reactivated the OLD edition? And why would I do that? The special edition was far better. I cringed, wondering if I'd slipped into early Alzheimer's. But as I told the gal at Trafford (which incidentally was taken over recently by US publisher Author Solutions), I really didn't remember authorizing the Kindle.

Today I received an email from my contact at Trafford (great customer service, by the way!). As Amazon investigated further, they discovered that Amazon had authorized my Kindle version--without MY permission. And I have NEVER been paid a dime from any sales.

So what now? Well, Amazon has to check their sales data and pay me for any sales owed. And this particular fellow won't speak with authors directly, so all of this has been funneled through a publisher that no longer handles Whale Song. But thank God Trafford checked into this! Otherwise I never would have known about Amazon posting an unauthorized Kindle.

While I understand mistakes can happen and since I do value Amazon as a major bookseller and I read Kindle books on my iPhone, my intention here isn't to bash Amazon or their Kindle department but to encourage authors to check their book pages on Amazon and make sure that no unauthorized Kindle editions have been created.

Now I will wait for my millions from Amazon. lol (Ok, millions of grains of copper for all the pennies I probably made.) To buy Whale Song on Kindle, you'd better do it now. Amazon will be removing it soon.

P.S. If you read this and you've purchased the Kindle of Whale Song--now or in the past--, please leave me a comment and let me know.

Authors: How do you find the right audience for your book?

Finding your audience isn't as difficult as some writers may think, though sometimes you have to think outside the box. The first thing you have to determine is who would read your book...


Visit Market My Novel to read more and to find out what 3 authors say about this.