YOU HAVE 10 SECONDS TO MAKE A DECISION:
Let A Kidnapper Take Your Child, Or Watch Your Son Die. Choose!
On sale July 1-31, 2012 for only $0.99.
An Amazon Top 100 Bestseller!
International Bestseller!
Pick up the Kindle edition today
and read it on your PC, smart phone, tablet or Kindle ereader.
Posted by Cheryl Tardif at 4:33 PM 0 comments

Book 1 in Divine series
CSI meets Medium meets Ghost Whisperer!
CFBI agent Jasmine McLellan leads a psychically gifted team in the hunt for a serial arsonist―a murderer who has already taken the lives of three people.
Jasi and her team members―Psychometric Empath and profiler Ben Roberts and Victim Empath Natassia Prushenko―are joined by Brandon Walsh, the handsome but skeptical Chief of Arson Investigations. In a manhunt that takes them from Vancouver to Kelowna, Penticton and Victoria, they are led down a twisting path of sinister secrets.


Sifting through ashes and clues, Jasi realizes that there is more to the third victim than meets the eye. Perhaps not all of the victims were that innocent. The hunt intensifies when she learns that someone they know is next on the arsonist's list.


Unleashing her gift as a Pyro-Psychic, Jasi is compelled toward smoldering ashes and enters the killer's mind―a mind bent on destruction and revenge. And in the heat of early summer, Jasi discovers that a murderer lies in wait…much closer than she ever imagined.

FREE Kindle edition - July 12/13
Editorial Reviews:
"Sci-fi and mystery fans will love this book." —Writer's Digest
"This chilling page-turner is a genuine Canadian crime novel...Tardif gives her readers plenty of twists and turns before reaching a satisfying ending." —Midwest Book Review
"Para-psychic, Para-psychotic, Para-captivating!" —Yale R. Jaffe, author of Advantage Disadvantage
"Believable characters, and scorching plot twists. Anyone who is a fan of J.D. Robb [aka Nora Roberts] will thoroughly enjoy this one…Divine Intervention will undeniably leave you smoldering, and dying for more." —Kelly Komm, author of Sacrifice, an award-winning fantasy
Available at:
Amazon
Posted by Cheryl Tardif at 8:00 AM 2 comments

As I mentioned yesterday, the South Dakota Women's Prison read WHALE SONG for their latest book club read. The coordinator, Vonnie, sent me an email with messages from the ladies. She's given me permission to share them with you.

We had a lively discussion about your wonderful book!! Here are some comments from the women at the SD Women's Prison Book Club:

Thank you for your book! To us here, at SDWP, it's always a great escape to delve into the reading world! I also truly "Thank You" for your letter with your words of encouragement and hope for us. It means A LOT!! The book means to me exactly like you state in your letter- the life lessons we learn and live with and without do boil down to "forgiveness sets your free" (Why let others have space in your head that they aren't paying for!!?!) and you DO need to quit being a victim and let yourself dream and live big and LAUGH and have fun! Thank you! I do believe in reincarnation.
*Sherry

I loved WHALE SONG. It is sad and it had me in tears. I can relate to many of the things that happened to Sarah. I learned lessons from the legends. Great book.
Thanks you.
*Lorna

The one thing that sticks out the most to me in the book is the bullying. I myself was bullied, not for long. I made my stand and continue to stand up for people who can't or won't stand up for themselves. That is very important to me to do something when you see it happening. Don't wait. It can and will make a big difference to someone? Thank you for this book and your letter. This was a gift for all of us that read it! Thank you and God bless. Forgiveness is a beautiful thing.
*Jamee

I really enjoyed your book. It did hit home for me because I lost my dad to cancer, and not a day goes by that I don't miss him. We always thought he would beat it--but he didn't.
*Nicole

Thank you so much for your letter to our book club--and YES--the most important message to come away with is to forgive. You are a gifted writer and I look forward to reading more of your stories. Very entertaining.
God bless,
*Teresa

I knew as soon as I read the first two paragraphs of this book that it was going to be a great read and also very close to my heart. I believe every mother/daughter should read WHALE SONG. I have two daughters (21 &14) who are reading it right now. It is very touching and emotional. I think we all need to practice forgiveness. It truly makes us better people and even enables us to help and guide those around us. Thank you so very much for sharing a part of yourself through your letter. I appreciate it very much.
*Nicole T.

I really loved the part where Sarah visits her old home that was turned into Island Arts. It was a beautiful way to remember her mother and her mother's talent. The book was beautifully written and hit straight to the heart as did your letter to us. Thank you so much for both.
*Candi

This book was extremely touching emotionally but even more so the message about forgives is strong is something needed to be reminded of, especially at this moment. Thank you for the letter. We are not all that different and I think we should try to remember that more often. Thanks again for such an enjoyable story of encouragement.
*Jennie

Your book helped me to find forgiveness and let things go. Is there going to be a book two to WHALE SONG? Thank you for the encouragement. It is beautiful.
*Miranda

You book was a huge hit as well as your letter. Again, I thank you for caring about women that need another chance in life.
Vonnie

If you know someone who could benefit from the messages in WHALE SONG, please pick up a copy of WHALE SONG and gift it to them. You may change a life. You may even save one. 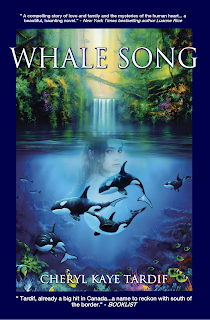 Many weeks ago I was notified by the book club coordinator at South Dakota Women's Prison. Vonnie told me she had selected Whale Song as their next read. I felt very honored and knew without a doubt that WHALE SONG would once again impact lives.

In the past, my novel about love and forgiveness had inspired people to change their lives. One woman told me it saved her life. Another said reading WHALE SONG changed her relationship with her estranged mother and they'd grown closer. So many stories about life-changing moments have come from reading Whale Song. That thought blows my mind.

Yet, here we are again, this time inspiring inmates of a prison. I don't know why they're where they are, but I do know that it's never too late to make changes, find forgiveness, seek forgiveness and start anew.

Vonnie asked me if I'd write a letter to the ladies. So I did.

I am so very honored that my novel WHALE SONG has been selected for your book club, and it touches my heart to know that some of you will be emotionally impacted by my words. I know this without a doubt, as that's been the experience for many, especially for those searching for answers about life's many challenges.

I won't pretend to know you, to know why you're where you are, but I do know this: life is about choices and often life isn't fair. No matter the choices you've made in the past, every day is a new day and an opportunity to make new choices.

You are survivors. I do know that. I'm a survivor too and it is what led me to write WHALE SONG. I survived bullying, racism, divorced parents, an alcohol overdose, rape, a suicide attempt, the death of my first baby, and the murder of my young brother Jason. These aren't things I share lightly and most of my readers will never know this about me. But I'm sharing it with you for one reason—to show you that we are not very different. Not really.

We all have hopes and dreams. Sometimes life crushes these and it's hard to see the light at the end of the tunnel. But I promise you, there is light even at the end of the darkest tunnel. And you begin to see it when you make a choice to pursue the light…and your dreams. It's never too late to have dreams.

WHALE SONG has one very strong message, something I hope many of you "get." Forgiveness sets you free.When we carry anger, resentment and revenge in our hearts, the only ones we really hurt are ourselves. When we can release negative feelings to the Universe, we are set free and can move forward, not back.

Because of the things that occurred in my life, some that led me to make bad choices, I had to learn to forgive. It's not easy, but it can be done. And it needs to be done so we can heal. Forgiveness is not for the others; it's for you.

If you come away after reading WHALE SONG and learn only one thing, I truly hope it is how to forgive. And that starts with forgiving yourself. Once you do that, you are free to dream and dream BIG. There are so many opportunities in life. Don't miss out on them. Make a difference. Make your life count for something. Dream…

Without dreams, we're just wandering along in life, barely existing. Dreaming can be scary. I know. But like Nike says, "Just do it." J I dare ya!

So today and every day when you wake up, tell yourself, "I forgive me. And I'm going to dare to dream and dream BIG."

God bless each of you.

Tomorrow, I'll post some of the women's responses to my novel and to my letter. Suffice it to say, WHALE SONG has once again changed lives. I feel very blessed.

If you feel moved by this, please pick up a copy of WHALE SONG and gift it to someone. You may change a life. You may even save one. 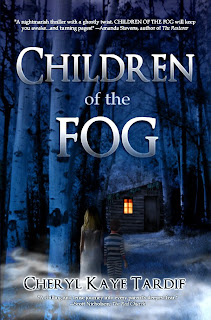 Amazon contacted me a few days ago asking if I wanted to participate in a special promotion. Since you know I love to experiment with different sales techniques, you know I HAD to say "yes."

And the best part? CHILDREN OF THE FOG is on SALE for only .99 cents.