THE RIVER gets a new look

My bestselling techno-thriller, THE RIVER, will be released next month in a second edition trade paperback, priced to be more affordable than the older version. Nothing inside has changed much; it's the same action-packed story, same mystery, same chills and thrills. But as you'll see, the front cover now has a more ominous feel to it and there's a new publisher.

In 2005, the original cover was designed. The book retailed for $25.99 and was then reduced to $22.50. But to be honest, that price has bothered me and I've been trying to find a way to bring THE RIVER to everyone--with a lower price. And now I have!

In June 2011, the second edition trade paperback of THE RIVER will retail for only $9.99 on Amazon. Over the following month or two, the new edition will be distributed to other retailers.


Seven years ago, Del Hawthorne’s father and three of his friends disappeared near the Nahanni River and were presumed dead. When one of the missing men stumbles onto the University grounds, alive but barely recognizable and aging before her eyes, Del is shocked. Especially when the man tells her something inconceivable. Her father is still alive!

Check out the following covers: 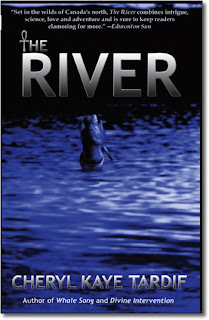 2011 cover
What do you think? Do you like the new cover?
THE RIVER is available in ebook edition at Amazon, KoboBooks, Smashwords, B&N and more.
Posted by Cheryl Tardif at 10:01 PM