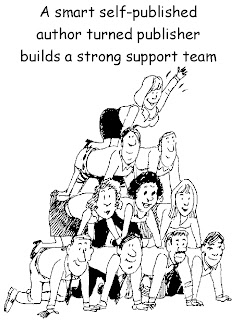 When I read respected agent Richard Curtis's post Do Authors Make Good Publishers? I wasn't surprised to find that Curtis believes the answer is 'No'. I get where he's coming from since I've been traditionally published AND self-published. Publishing takes a lot of hard work, knowledge and dedication. But is it fair for Curtis to lump all authors under that umbrella of 'No'? I don't think so.

For years, various elements of the publishing industry have tried to tamp down the involvement of authors in their own success. Publishers didn't want too much input from authors; they wanted to maintain their iron-gloved fist of control. Editors wanted to be seen as the experts on all things grammatical (and in many instances they were), even to the point of changing story elements to suit their tastes. And the writer has been at the bottom of the heap, the creator of a story that stemmed from their ideas.

Traditional publishing is made of many moving parts--publisher, editor, cover artist, publicist etc. Self-publishing required that an author either take on all these roles or sub-contract these areas. A smart self-published author quickly learns that though they may be good at all areas, it's far better to hire out and cut down the work load. This was they can focus on writing more books. That's what I do. That's what makes a good publisher, the ability to recognize areas of strengths and delegate others.

Respected author and self-publishing advocate JA Konrath posts a reply to Curtis on his blog, and he makes some valid points. First, anyone who has been following Konrath over the past year knows where he stands on self-publishing. He's all for it and is one of the top income earners in the ebook industry.

"Authors should self-publish," Konrath writes. "In an ebook-dominated world, are publishers even needed?"

I've watched the massive rise in popularity of ebooks and ereaders. No one predicted it would happen this quickly or early, but it's here. Ebooks are outselling print books. I know that just from my own sales data. My ebook sales in December blew my print sales out the door.

The biggest indicator for me that ebooks are King is this:

My mother who is an avid reader of about 3 paperbacks a week always claimed how much she loved print books and that she'd never read via an ereader. So I gave her one for her birthday in August. When I spoke with her at Christmas I expected her to tell me she hadn't bothered to turn her new Kobo on yet.

Boy, was I shocked by her answer. She "LOVES" her ereader. She likes that she can enlarge the font for easier reading and that she can buy books so easily. She's already downloaded all of Lee Child's "Reacher" ebooks. She reads during the day. She reads in bed. No more waiting for time to shop for books at the store. If you knew my Mom you'd know that this is a clear revelation as to where ebooks are going. The surprising news: We're there!

So back to Richard Curtis's question: Do Authors Make Good Publishers?

Some do; some don't. A self-published author taking on the role of publisher will have to dedicate time and energy to the process. If they're doing print, they may be looking at ways to get books into stores, something that is getting harder by the week. But if they're publishing ebooks, the doors are wide open.

Publishing is a skill or trade that can be learned. So yes, SOME authors can and will make great publishers. And SOME won't. It's unfair to lump all authors under the "No" umbrella.

I'm an author who has been traditionally published and self-published. Yes, taking on the publisher 'hat' requires more work, but it's worth it. A smart self-published author turned publisher builds a strong support team. I can honestly say I'm a better "publisher" than my last traditional publisher. I'm still in business.
Cheryl Kaye Tardif
P.S. I just answered the door. My new Kobo ereader with Wi-fi is here! Whooo-ooo!
Posted by Cheryl Tardif at 11:50 AM

I remember not too long ago, when publishers wouldn't accept illustrations that authors did for their own books--saying a person could not be good at both writing and art, so they must choose one or the other! There are exceptions to any rule, however writers must realize that, as you say, publishing, editing, promoting, and writing is a lot of work, much of it requiring specialized skills. It will be interesting to see how our industry responds to the ebook phenomenon. p.s. I got a Kindle for xmas.

So very true. I actually got a rejection from a publisher because he didn't want to use my artwork for a children's book. I've always been an artist AND a writer.

One day I'll publish my 2 children's books, which got a fantastic response when I took them into schools and daycares and read them to children. :-)

Authors can learn everything it takes to publish their own books, either as ebooks or print. It'll just take some time and willingness to learn.