In memory of my brother Jason... 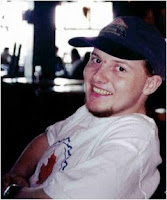 Today, my "baby" brother Jason would have turned 30. Quite a bit younger than I am, I know. He was an "oops". And a delightful one at that. As a baby, he had curly red ringlets and often looked like a chubby cherub. But with the red hair came a mischievousness that was anything but angelic.

Jason made us laugh.

And his death made us cry.

Jason Kaye was murdered here in Edmonton, and not a day goes by that I don't think of him. Sometimes I see a kid who reminds me of him. Sometimes I hear about another lost soul whose life was somehow pushed off track. Jason was at one time homeless, living on the street, dumpster-diving for computer parts so he could fix a computer up enough to sell it, and an alcoholic with mental illness. None of us saw the latter until it was too late.

He died on January 23rd, 2006--Edmonton's third homicide of that year. His case is still open. No leads. No answers. No one has come forward as a witness. I am resolved that it will always be this way.

I feel a slight emptiness in my heart when I think of my brother. I think he took a small part with him. But that's okay; he can keep it.

Jason would have turned 30 today, had a huge party with his friends, probably gotten drunk...but he would have had fun.

Tonight I'll light a candle for him, in memory of a brother I truly loved, although I sometimes didn't understand him. But that's okay. I know he forgives me...and I him.

Recently, I was interviewed by CityTV for a segment on Celebrity Chefs. I had fun taping it and making Strawberry Dumplings with my daughter Jessica. This was one of Jason's favorite desserts and we made it in his honor. I'll make some tonight and think of Jason.

And remember him for who he was.

Jason only read Whale Song, none of my other novels. And that's why I now donate a percentage of my royalties to 3 Edmonton nonprofits that deal with homelessness, addictions and poverty. I will do this as long as Whale Song is published and available to the public.

Much of our lives growing up was similar to Sarah's in Whale Song. We lived on an isolated island (Jason lived on 3) and grew up with native legends. I invite you to check out Whale Song, buy copies for your family and friends. It makes a wonderful gift for any age between 7 and 108, and I know that my brother would be grateful, as I would be, that your purchase is benefitting his community, his family and friends on the streets of Edmonton.

One thing I have learned: these people, these human beings living in poverty and battling addictions, are somebody's son, father, grandfather, daughter, mother, grandmother, sister...or brother. And they're just as human as the rest of us.

To read about Jason Kaye, please visit his memorial site at http://www.jaysporchmonkeys.com/.

Order Whale Song and help those in need of a friend...a helping hand. We have all needed that at some point in our lives.

Posted by Cheryl Tardif at 5:36 PM

What a touching post about your brother. I'm so sorry for your loss. But you've made us think of how we can each reach out to others who might need our help right now.

Thank you for sharing your story.

Thank you, Suzanne. Your comments are much appreciated.