Interviews and Advice from The Mystery Writers

Not too long ago I was asked to share some of my thoughts on indie-publishing and marketing for a book edited by Jean Henry Mead. So today I welcome Jean to my blog to tell you more about THE MYSTERY WRITERS.

Not everyone agrees that independent publishing is the key to writing success, but there are a growing number of authors who are proving the skeptics wrong. A growing number of writers are among an elite group with bestselling track records, such as my host, Cheryl Kaye Tardif, whose secret to success is ingenuity and hard work promoting her books, as well as Imajin’s authors. Among her publicity tools are two main websites and a blog as well as membership in various social networks.

She says in The Mystery Writers: “In 2010 Amazon opened KDP to Canadian authors and I went back to my roots—to indie publishing. For me it's probably the best fit. I am by nature very independent and a strong marketer. Plus I'm ‘an idea person.’ Even my old publisher saw this in me and often called me a "guru" or "marketing genius." While I don't consider myself a ‘genius’ I do know that I'm a risk-taker.” 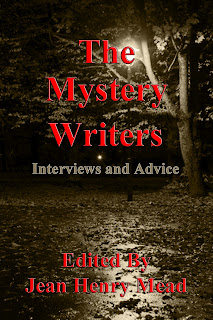 Independent publishing isn’t for everyone. It requires not only writing talent but good marketing skills and industry know-how to succeed. A number of other self- publishers are included in The Mystery Writers as well as bestselling traditionally published novelists such as Sue Grafton, Lawrence Block, J.A. Jance, Vicki Hinze and James Scott Bell (former Writer’s Digest fiction columnist).

Tim Hallinan, award-winning author of the traditionally published Poke Rafferty mystery/thriller series, decided to self-publish his Junior Bender series—humorous stories of a burglar with a “moral code who works as a private eye for crooks.” Tim’s earlier novels earned him critical acclaim but not enough money to retire from his day job. He now earns thousands of dollars a month with his self-published ebooks.

He said the reason he decided to leave his agent and publisher was because “the money we were offered by the publishers wasn’t very good. I looked at the offers and thought, ‘I’d rather own my books.”

Rebecca Dahlke once managed her father’s crop dusting business in California, and decided that her protagonist—a beautiful former model—should also be a crop duster. She then decided to independently publish her novels, with startling results. Rebecca, like Cheryl, is a promoter and a humorous one at that. She says, “Self-publishing is no longer a dirty word. . . Eons ago, back in the dark ages (of publishing)—was it really only five years ago?—all we authors could hope for was a good agent, a decent publisher, a slowly growing fan base, and a list of book stores that might, or might not, keep our books on their shelves for three to six months before returning the unsold copies to the publisher. We could send in Advanced Reader Copies to prestigious reviewers or magazines and hope they would say nice things about our books, or pay a publicist to tout it, take our dog and pony show on the road, eat bad food, stay in crappy hotels, be at that next book store, book fair, conference, and smile till our cheeks ached. . .

“The changes have been exciting, and for this author, validation that I too can write books that readers enjoy. So, for all the august veterans who see the Internet as an encroachment onto their hard-won personal turf, let me paraphrase one of my favorite movie lines: Saddle up boys and girls, it’s going to be a bumpy ride!” You can read how she accomplished her success in The Mystery Writers.

And, after ten publishers of my own over the years, I decided to independently publish The Mystery Writers with my own small press. The 406-page book is currently available on Createspace: https://www.createspace.com/3792541 and will be available on Amazon.com, Kindle and Nook after March 26.

The 406-page book is a veritable bible for fledgling writers because the advice offered by 58 bestselling, award-winning and midlist writers is invaluable for any genre. Twelve subgenres are represented and the writers write from as far away as South Africa, Brazil, Thailand, the U.S. and England.

Bio: Jean Henry Mead is a national award-winning photojournalist in the U.S. as well as a mystery/suspense and western historical novelist. She’s published 17 books, half of them novels and served as a news reporter; news, magazine and small press editor in California and Wyoming.
Posted by Cheryl Tardif at 2:41 PM

Thank you for the kind invitation, Cheryl. It's great to visit you here. We found a small mistake in one of the writer's blog links, so the book had to be temporarily taken down until tomorrow (Friday).

Count me in. I'm in the book and just ordered my copy. I think this type of book is a great idea.

Thank you, Marja. I wish a book like this had been around when I begn to write