Kindle versus Kobo - From a Reader and Writer's Perspective 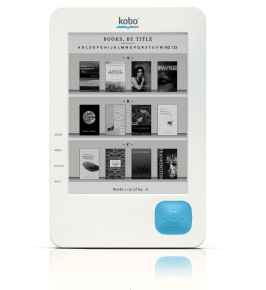 I have a Kindle and a Kobo ereader. I bought them because I love to read but also because I'm an author and I think it's important that I know how my readers are experiencing my works. So I decided to test both the Kobo and the Kindle.
I bought the Kobo ereader first. Since I'm Canadian, I really wanted to be loyal to Canada's #1 ereader. I've also been selling my works via Kobo since they first began as an offshoot of Chapters/Indigo, called Shortcovers. And I liked Kobo's simpler, more friendly design.
My first experience with a Kindle ereader seemed fine. My ebooks loaded and I had minor issues. I tested it for a few weeks, then gave it to my mother when Kobo announced they had a new ereader with wi-fi. So I bought that one.
It pains me to say that my experience with the second Kobo was not a good one. I had numerous problems with loading my ebooks. I ended up having to delete one just so the others would load properly. Kobo was good about giving me a refund. I read everything I could find to help with other glitches I was experiencing, like bookmarks not holding and synching not working between devices (I have a Kobo app on my iPhone too.)
I had to do a factory reset on my new Kobo 3 times, and it still did not fix the problems. Though tech support was great and they did try to help, I ended up having to send the Kobo back and get it replaced. This third Kobo loaded all my books correctly, but the bookmarks still don't hold. 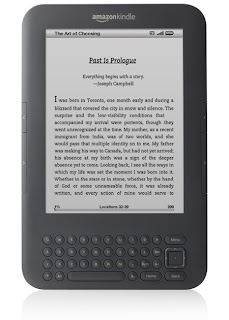 Other than the technical issues I've had, I love the experience of reading on an ereader. It's small, lightweight, easy to hold (especially if you have arthritis in your hands), easy to turn pages (though Kobo isn't as fast as Kindle at this) and very easy on the eyes. Since there are less buttons on a Kobo, you don't have to worry about accidentally hitting one and ending up somewhere else. My Kobo also has an esthetically pleasing appearance; mine has the lilac colored back and white front.
The Kindle ereader I bought next. I bought it hoping that it wouldn't be quote as good as the Kobo. Darn...it's better. Basically a similar size and weight, I find pages load much faster and the battery lasts far longer than its Canadian counterpart. My Kindle doesn't look as "pretty" as my Kobo, but overall its performance is superior. It loads books faster. I haven't had one glitch yet since buying it. My bookmarks are exactly where I left off, and there are added features I can use, like Search, which came in handy when I was sprucing up my grammar skills. The only real downside is that there are perhaps too many buttons on the front and sides, which makes it a bit tricky for holding. I'm thinking a slide-out would maybe work.
And then there's the issue of PDFs. I'm a writer. I sometimes get PDF ARCs to read. I want to be able to do so on my ereader. First you have to transfer your PDF to Adobe Digital Edition. Then you have to synch this to your Kobo, which can be a hassle. Then there's the appearance. I transferred some of my PDFs to my Kobo and was horrified to see how it was formatted. Readers have to read one line at a time, scrolling left and right as the sentences won't fit on a single page. If you diminish the size of the text so it fits on one page, it's unreadable. Can we say AWKWARD? I'll never read a PDF like that. Unfortunately, that means neither will most readers.
Reading PDFs on a Kindle is a breeze. First, I just send an attached PDF to my Kindle address. Within 10 minutes or so, Amazon converts it and once I turn on wi-fi and synch, the PDF is loaded onto my Kindle. Upon opening, the PDF looks just like any other well-formatted ebook.
In a nutshell, I prefer my Kindle. But I'm kind of sad that I couldn't say this about my Kobo. I think if you're looking for a basic ereader, the Kobo is fine, as long as it works properly. I'm hoping Kobo will get all these issues--especially PDFs--ironed out soon. Now that Amazon has lowered the price of the Kobo with wi-fi, I would recommend you buy it over the Kobo. You'll get more bang for your buck.
Now which should I try next, a Nook or a Sony ereader?
Posted by Cheryl Tardif at 9:40 AM

Try a Sony. Lots of people have Nooks, but I haven't heard anything about Sony :)

I luv my Kindle (and the Vancouver Canucks!)

As far as books go – which ereader do you prefer? Is one store cheaper, availability of books, etc? Making a decision and need to know!!!

As much as I don't like to say it, I prefer my Kindle. I've had less technical problems with it than my Kobo. Either store is great for selection and prices are basically the same, although Amazon has far more FREE titles. Happy reading!