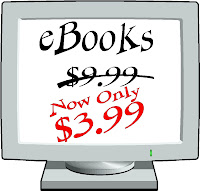 For authors: How important is ebook pricing?
Posted by Cheryl Tardif at 10:02 AM