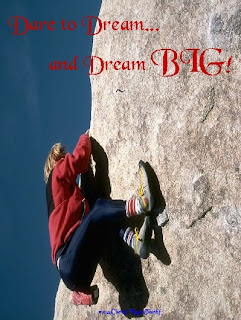 It is said that every person has at least one good story in them! Some people are gifted to have more than one.

Do you know a future writer – someone who dreams of writing fiction, poetry, or short stories? Maybe that future writer is…you! If you dream of writing, then why not write?

Why not Dare to Dream…and Dream BIG?

There once was a young girl who dreamed of becoming a writer. Her goal was to become the next Stephen King…or 'Stephanie', at least. When she was about 16, she started writing a novel. It took her over a year to complete it and at 17, she tried to find a publisher. She submitted query letters, partial manuscripts…and her dreams, for other people to judge. She received rejection letter after rejection letter.

For the next few years, she wrote mostly poetry until she submitted a health and beauty article and landed another column in a small newspaper. And then a year or so later she ended up in a New Brunswick newspaper, as the writer of a song dedicated to the Gulf War soldiers. This was the first indication that she had power – power to influence people's emotions, to make them feel something.

Years passed as she struggled to find a way to make her dream come true, to be that writer. She continued to write, took a course in journalism/short story writing and graduated with a 98% average. She wrote two children's books, complete with illustrations and tried desperately to get them published. They became her 'babies', her creations. Her children's books were well received in schools when she did readings, but no one seemed interested in publishing them. After two years of more brick walls, she gave up trying. Her dream dissipated…died a slow death.

More years went by, until one day she was talking to a friend about a story she had always wanted to write. It was a story about a young girl who experiences a tragedy and loses part of her memory – a tale about killer whales and native legends. It was a story about wolves and dreams, love and life, death and fear…but mostly it was a story about triumph and forgiveness. Her friend told her "You need to just WRITE it! Even if it never gets published, write it for YOU!"

My friend was right! And now I am a bestselling author!