Today, I'd like to welcome New York Times bestselling author Heather Graham to my blog. 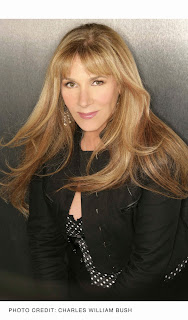 A CHAT WITH HEATHER GRAHAM
AUTHOR OF “LET THE DEAD SLEEP”

Yes, thank you! The team of Cafferty and Quinn will struggle through more ordeals—and how to manage their relationship, as well.

I love the possibilities out there.  I can be the world’s worst skeptic, but I’m also curious and ever hopeful.  Most of us have lost loved ones—I want to believe that I will see mine again. If such things are possible, then the world of what we don’t see all the time just might be possible, too.  I love hearing stories and I’ve heard some really good ones that make you wonder about the power of the human mind—and soul.

I think I’ve loved them all. Last year (available on On Demand, I believe!) my daughter and I appeared on “Haunted Encounters” for the Biography Channel. It was for their half hour segment on the Lizzie Borden house. She played Lizzie and killed me as Abby and our friend, writer Dennis Cummins, as Andrew Borden. She was great! But they had me lying right where Abby had been found and Chynna had a real hatchet. It was pretty creepy!

I also love the cemeteries (and any place, really) in New Orleans, the Spanish Military Hospital, St. Augustine, a number of places in Key West, Salem, Massachusetts, and the Myrtles Plantation, in Louisiana.  There’s a YouTube video up (Heather Graham’s Krewe of Hunters Ghost Series, http://www.youtube.com/watch?v=FtC2fCOwV9A) from our Myrtles Plantations trip.  We had the whole plantation to ourselves for a weekend to film and explore.  My friends, the Peace River Ghost Trackers, were with us.

We had a séance once at the House of Seven Gables. That was amazing! Other places in the world would include the Tower of London, the Capuchin Monastery church in Rome, the underground in Edinburgh . . . my list could go on and on.

As I write this, the Queen Mary.  The Peace River Ghost Trackers arranged for us to have one alone with just a single guard to explore the ship.  We spent a lot of time in the pool area and beneath the stairs, said to be among the most haunted places on the ship.   It was the most convinced my daughter ever was that something or someone else might be there.

Most probably the Lizzie Borden house.  The owner, Lee-ann Wilbur, has done an amazing job refurbishing and refurnishing—areas of the house look exactly as they looked in pictures taken at the time of the crimes.  She also has a number of headless mannequins dressed in period clothing throughout the house.  Every year after a great conference in Rhode Island called NECON, I go up to Fall River with a group of writers.  We take the entire house for a night.  The only time I was the last one to go to bed, I was moving through the house walking normally, when I suddenly began running to get to my room.  Lee-Ann is a wonderful hostess and the B and B is beautiful. Whether you’re a believer or not, it’s a great place to stay.

There’s something extremely special about New Orleans.  It’s where the documents for the Louisiana Purchase were signed and it’s been home to about every nationality in the world. The food is great and just walking down the streets in the French Quarter you can hear some of the best music in the world.  Jackson Square is as filled with life as the cemeteries are with the essence of death.  I think I especially love the city because you do see every one of every belief from everywhere in any flesh tone known to man. I love the history because it’s so rich, and I especially love it because it’s a living history. Lafitte’s old shop is a bar. Hotels where soldiers were cared for once still stand—and welcome guests. I love the art, the music, the architecture—you name it!

If I love a place, I try really hard to let a reader see it—and hopefully, love it as I do, or want to visit!  Also, I know in life that where I grew up influenced me. What we see, feel, live, and touch every day definitely has a bearing on our view of the world.  Some of us love snow and can’t see a Christmas without it. Some of us are accustomed to having water near by—warm water in my case!—and can’t imagine life without escaping to the sea. Growing up, I was lucky. My parents were readers. I read my dad’s war books and a lot of the histories and novels my mother brought from Ireland—they made we want to see the places I read about. I hope to do the same—bring a place to life.

We’re mortal—and we don’t want to be! I think, as well, that most people feel the same way I do—that we must see our loved ones again. Also, curious but true, the concept of vampires remains sexy, superpowers, well, we all want them, and as for zombies . . . well, we’re always afraid that the apocalypse is coming, so you should be ready to fight off zombies, right?

On television, “Supernatural” is my favorite.  When it comes to movies, I have a few! “Ghost”—a beautiful story!  “The Frighteners”—funny and creepy.  And popping vampires in there, I’d say “The Lost Boys.”

More of the Krewe of Hunters. They’ll travel to an old theater out west, in Arizona, to a haunted restaurant in Savannah, and then to Nashville, where a Civil War soldier still tries to warn others of impending danger!   THE NIGHT IS WATCHING is out in June 2013.

11.   You write both historical and contemporary romances.  Which do you prefer?

I love them both!  When you are writing an historical novel, you’re dealing with a different set of values, a different political situation, even a different moral code dictated by another time.  To make the story work, you have to take all those things into consideration, as well as everyday things like appropriate dress, the running of a household or the raising of children, to make the story come alive for the reader.

12.   You have five children.  What’s the most important thing you have learned from them?

That your kids really raise you. Children open so many doors. As parents, you meet people you wouldn’t have met, learn about things you would have missed out on, have experiences you’d never have had without them. I’ve gotten the inspiration for books from my kids’ Little League days, a friend of one who is a U.S. Marshall, one son’s passion for dance—and the love of the mysterious and travel that we all share. But the most important thing I’ve learned from them is that there is nothing more important than the ones you love.

13.   If you weren’t a writer, what do you think you’d be doing right now?
My major was theater, so if I hadn’t become a writer, I would probably be playing one of the witches from Macbeth somewhere in regional theater.  Who knows, maybe I’d be on a top soap like Kelly!

14.   What else would you like your readers to know about you?

That I feel so blessed to be able to do something I really love to make my living, and it’s the best career in the world with five kids.

An object of desire? Or fear?

It was stolen from a New Orleans grave—the centuries old bust of an evil man, a demonic man. It's an object desired by collectors and by those with wickedness in their hearts.  The spine-tingling new novel from HarlequinMIRA, LET THE DEAD SLEEP (April 2013) by New York Times bestselling author Heather Graham is the story of one man’s desire to possess the statue and control its evil powers.

One day, the current owner of the bust shows up at Danni Cafferty's antiques shop on Royal Street, the shop she inherited from her father.  The woman is desperate to rid herself of the object, but before Danni can buy the statue, it disappears, the owner is found dead...and Danni discovers that she's inherited much more than she realized. In the store is a book filled with secret writing:  instructions for defeating evil entities. She'd dismissed it as a curiosity... until the arrival of this statue, with its long history of evil and even longer trail of death.

Michael Quinn, former cop and now private investigator, is a man with an unusual past and a former colleague of Danni’s father.  He believes that doing the right thing isn't a job-it's a way of life.  And the right thing to do is to find and destroy this object weighted with malevolent powers.  He and Danni are drawn together in their search for the missing statue, following it through sultry New Orleans nights to hidden places in the French Quarter and secret ceremonies on abandoned plantations.

Cafferty and Quinn already know that trust in others can be misplaced, that love can be temporary. And yet their connection is primal. Mesmerizing. They also know that their story won't end when this case is closed and the dead rest in peace once again.

Heather Graham has written more than a hundred novels, many of which have been featured by the Doubleday Book Club and the Literary Guild.  An avid scuba diver, ballroom dancer and mother of five, she still enjoys her south Florida home, but loves to travel as well, from Venice, Italy, Cairo, Egypt, New Orleans, Los Angeles and Boston to her own backyard, the Florida Keys.

Reading, however, is the pastime she still loves best, and she is a member of many writing groups. She's a winner of the Romance Writers of America's Lifetime Achievement Award, and the Thriller Writers' Silver Bullet. She is an active member of International Thriller Writers and Mystery Writers of America, and also the founder of The Slush Pile Players, an author band and theatrical group.

Heather hosts the annual Writers for New Orleans conference to benefit both the city, which is near and dear to her heart, and various other causes, and she hosts a ball each year at the RT Booklovers Convention to benefit pediatric AIDS foundations. For more information, check out her website: www.eHeatherGraham.com. You can also find Heather on Facebook.

Posted by Cheryl Tardif at 6:42 AM