Today I stumbled across a review of my horror collection: Skeletons in the Closet & Other Creepy Stories, a book that has been in the making for a number of years and contains some stories that are over 20 years old. Google Alerts notified me that someone had reviewed Skeletons, so I had to pop over to Lunch.com to take a peek.

I immediately contacted the reviewer and asked for permission to quote some of his review here and on my website, and he graciously said yes. So here is a condensed version of Paul Weiss's review...


"SKELETONS IN THE CLOSET is a thoroughly entertaining and unabashedly Canadian collection of horror shorts - a straightforward, in-your-face, goosebump raising, skin crawling creep fest with brilliantly conceived endings that, while crystal clear in their intent and meaning, typically arrive out of a shockingly distant and unforeseen left field...

Having vowed that I would read more from this obviously talented Canadian author, I was thrilled when I discovered this collection of short stories...SEPARATION ANXIETY tells a tragic story of the grief of losing a child to an untimely accident and reminds us that revenge is a dish that is sometimes best never served at all! DEADLY REUNION is a chilling little tale of long lost teenage acquaintances that starts with stories of teenage angst and the cruelty of bullying ending with paranormal visions and questions about fate and destiny. If a reader was as twisted as Cheryl Kaye Tardif, one might say that her endearing story, OUIJA, is about a gift that keeps on giving! There are several other stories and I was also thrilled to discover that, unlike so many other collections of this type, there is not a single piece of dead wood in the entire anthology.

I never thought I would get so much enjoyment out of being called "twisted". LOL

Finding an unsolicited review is like getting an unexpected gift from a stranger. And it connects me to a primary reason WHY I write: to entertain others (or scare the crap out of them.)

You can read Paul's full review at Lunch.com and on Amazon.com.

Skeletons in the Closet & Other Creepy Stories is available in ebook edition via Amazon, KoboBooks, Smashwords, B&N, and other ebook retailers. It's currently on sale until January 10th, 2011, for $0.99.
Posted by Cheryl Tardif at 1:19 PM 0 comments

The book trailer video for my bestselling romantic suspense, Lancelot's Lady, has been entered in the You Gotta Read Videos contest for December. It is entry #6 and I hope you'll check it out and vote for it.

My trailer was created by the talented Kelly Komm, who is also an author. Thanks, Kelly!

To view all the contest videos, please visit: http://t.co/d6GnHvT

Thank you to everyone who votes for Lancelot's Lady. I so appreciate your support! Have an awesome Christmas.
Posted by Cheryl Tardif at 6:03 PM 0 comments

Stairway to Heaven: Remembering Those We've Lost at Christmas

Today my article on remembering loved ones and grieving during the holidays is featured at the National Crime Writing Month blog.

Holidays are particularly difficult for anyone who has lost a loved one. I hope my words are of some small comfort.

Please read my article: Stairway to Heaven: Remembering Those We've Lost at Christmas
Posted by Cheryl Tardif at 2:33 PM 1 comments

Anyone who knows me knows that I love talking about writing, my books and ebooks, and publishing, and I never refuse an interview. I am a "shameless promoter", the #1 requirement in this business.

Today I spoke with writer, director and producer David Wisehart and answered a few questions about Whale Song, my most popular novel, and being a Kindle author.

Please drop by the interview on David's site.

Check out this post at Kindle Nation Daily.
Posted by Cheryl Tardif at 10:40 AM 0 comments

A few weeks ago, I received an email from a representative of Hodder Education in London asking for permission to reprint my poem, A Whale Song, which was inspired by my love of whale (in particular, killer whales) and my sadness over their senseless slaughter by fishermen. A Whale Song will be featured in an upcoming educational book for schools. I'm very honored and pleased to have my work presented to students and teachers. 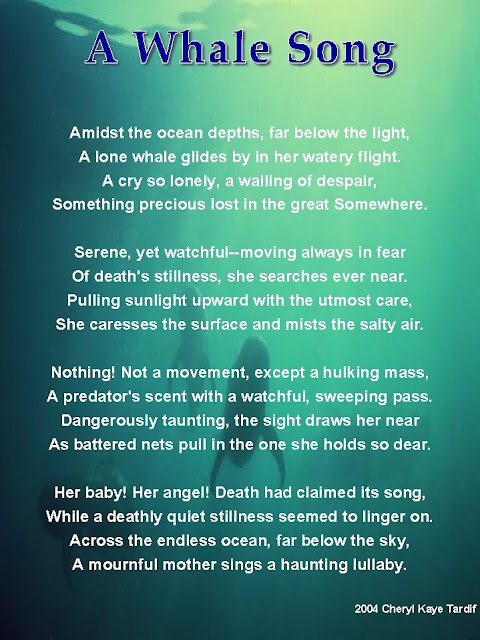 For a limited time*, you can purchase the following ebooks on Smashwords.com for only $0.99 each:
WHALE SONG (YA/mystery novel - 2010 edition)
LANCELOT'S LADY (Romantic suspense novel)
SKELETONS IN THE CLOSET (Horror/Suspense anthology)
REMOTE CONTROL (Suspense/Sci-fi novelette)
THE RIVER (Suspense thriller novel)
DIVINE INTERVENTION (Paranormal suspense novel)
You can read Smashwords ebooks on a variety of ereaders and smartphones, plus you can read on your computer or laptop. Multiple formats available. You can also read large samples.


This same sale is on all my Kindle ebooks too.
And I have a time limited offer on autographed trade paperbacks.
Happy Holidays!
Cheryl Kaye Tardif
www.cherylktardif.com
*This offer expires January 10th, 2011.
Posted by Cheryl Tardif at 7:30 AM 0 comments

While supplies last, I am offering to autograph and mail out WHALE SONG, THE RIVER and DIVINE INTERVENTION to customers in Canada or the US. I have 35 of each book in stock and I'll take orders until December 20th.

Remember to note via PayPal who you want the book addressed to, especially if it's a gift. I can mail it to you or to the recipient, so be sure to add that info to PayPal.

*A free bookmark is included with each book.

To order, click on Add to Cart buttons below:

WHALE SONG - a "compelling" story of family ties, love, tragedy, sacrifice and transformation that will change the way you view life...and death.

DIVINE INTERVENTION - CFBI agent Jasmine McLellan is assigned a hot case―one that requires the psychic abilities of the PSI Division.


Shipping times vary and can take one to 2 weeks to arrive. Canada and US destinations only.

My Smashwords ebooks are on sale - only $0.99 each

Hello all and a great big thank you to my hostess for having me here as part of my Redeeming Characters blog tour. One of my personal guilty pleasures is watching brainless comedies. You know the kind when you laugh at toilet humor and people falling off high places to land in a whole pile of icky glop? Yes I know, how sophomoric, but I love to laugh.
Going hand in hand with that is the drive to make other people laugh too. I don’t have the personality for a stand-up comedian—I actually don’t like that much attention focused on my person. I’m more like the two old muppet characters snarking from the balcony.
In typical comedy, the one-liner character is invented for a single purpose, to say something pithy to ease the tension or sometimes to ratchet it up a few notches. After watching enough comedies though, I stop following the main storyline and my mind starts wondering what his story is, what makes a man so snarky and always ready to quip at another’s misfortune?
Popular culture has never really delved into that guy, the side kick, the wingman. Sure you have your comedic heroes—John Cusack comes to mind— but the characters he’s plays always have more depth right from first scene.
Unsatisfied at the offerings of snarky heroes, I made one up instead. From his very first line, “Did anything in the known universe suck as much as author day?” I knew this guy was exactly what I wanted, the kind I yearned to know more about. Absolutely nothing was sacred— anything in sight was fair game to Drue.
What I didn’t expect were the hidden depths, the dark and twisty places inside his head that not only explained why he became the one liner guy, but that he really had no other choice. Part nature, part nurture equaled a scary and difficult human being.
You see, the typical one liner guy, he’s a one trick pony. Pop over, unleash a zinger, or two and then fade away. A true romance novel hero needs more depth, more color. There were times when writing Redeeming Characters when I worried I was ruining my zinger guy, after all, who can laugh in the face of constant suffering and not look like a total lunatic?
Worse yet, the one liner guys aren’t typically fantasy material. They fit more comfortably in the role of the best friend’s older brother, like Paul Rudd in Clueless. Sure, he gets the girl in the end, but he went overlooked for a good portion of that movie.
So how to create a real Alpha hero who could be snarky and loveable at once?
After years of struggling it hit me. And man, did I feel like a moron when the dust finally settled. It’s not what he says, it’s what he does. You know the schoolyard rhyme. Sticks and stones may break my bones but words will never hurt me? Well, they do hurt, just in a different way. I had to make sure his actions spoke to the man, and made up for the words Drue wields like a weapon’s expert.
So, that’s the story of how I turned the sidekick into my leading man. Come check out Redeeming Characters available wherever ebooks are sold and in print now at Amazon.com. One random commenter, selected by my good hostess, will receive a Redeeming Characters keychain. Be sure to stop by www.jenniferlhart.com for a chance to win the blog tour prize.
Posted by Cheryl Tardif at 12:03 AM 24 comments