A few months ago, during the WGA strike, I complained a bit about how I wanted my favorite TV shows back. Then I confessed that I was watching The Celebrity Apprentice for lack of better programming and because I was tired of watching reruns. I have missed a few episodes, but I've seen the most fiery ones, and I have formed a definite opinion of Piers Morgan and Omarosa whatever-her-last-name-is. 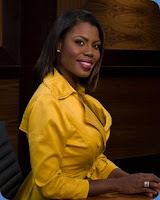 First, regarding Omarosa, who reminds me somewhat of a black widow spider...I have said this since the beginning: what on earth is she doing on a show for celebrities? She was a reality TV guest in a past Apprentice. Heck, I was a reality guest on A Total Write-Off, a TV game show for writers, but does that make me a celebrity worthy to be teamed up with such big names as Gene Simmons, Carol Alt, Marilu Henner and Lennox Lewis, to name a few? I'd like to think so, but I'm realistic. I haven't reached that level of celebritydom...yet!

Sometimes I wonder if Donald Trump didn't just bring her in because he's a smart man and knows there will be guaranteed controversy. He knows what he's doing and I am just amazed that he kept her on for so long.

Now normally, I am not so bold in my observations of people, and I usually never write about them. But Omarosa has always bugged me. I find her demeanor to be hard-nosed, vulgar and brash. She certainly has a problem with people skills--or the lack thereof.

In one episode of The Celebrity Apprentice, she laid into Piers, attacking him personally and bringing his family into the conversation. It's apparent she has some smarts, I guess. She obviously researched her competition and filed away any sleazy tidbit she could use later. I found this attack on Piers to be thoroughly reprehensible. She couldn't get any lower. Or so I thought.

Warning: the following may contain spoilers!

On tonight's episode, we see Omarosa reeling from embarrassment at yet again ANOTHER failure as Project Manager and failing the SAME task that got her fired the other time she was on Apprentice. Knowing her team had already lost, she acknowledged that Piers and his team pulled a coup de gras. In fact, Omarosa's team, consisting of Stephen Baldwin, Trace Adkins and the wicked witch herself, were totally "slaughtered" (Trump's words), selling only $7000 of artwork, compared to the other team's $140,000+ (or whatever it was).

Not wanting to acknowledge her complete failure, Omarosa first tries to point the finger at Stephen Baldwin. I'll admit, he didn't seem to contribute much in this challenge, other than spying on the other team, which was obviously a waste of effort. Then as a last ditch effort to redeem herself, she attacks Piers after he has left the boardroom and knowing that he would be watching, this time with accusations that he wasn't "out of the closet" yet. I could almost hear jaws hitting the floor all across Canada and the US.

In the boardroom, Mr. Trump called her on her latest stunt. It was obvious by his careful wording that he was not impressed. He questioned her about her accusations that Piers was homosexual. Try and back pedal your way out of that one, Omarosa.

Then Mr. Trump suggested that Piers come back to defend himself. My heart sank a bit at that, especially when I saw Piers take him up and head the boardroom. In the past, I have cringed while watching Omarosa chew him up and spit him out, and I have sometimes shaken my head when Piers let her get to him and reacted. But can anyone blame him?

I held my breath as Piers Morgan entered the room and headed straight toward Omarosa. Or so I thought. For a brief second, I wondered if he'd smack her. But instead, much to my relief and surprise, he leaned down and planted a kiss on the cheek of country singer Trace Adkins. A cheeky move, Piers!

Poor Trace didn't know how to react. Then Piers left the room. We all got the message--even Trace, eventually. Rather than react to Omarosa, Piers held his head high. Kudos to you for your inner strength, Piers! I am sure that all across America people were cheering for you to deck her.

Why does Omarosa stoop so low? I've heard people refer to her as OmaGrosa! This woman has no shame, decency or respect for herself or anyone else. She'll use ANYTHING to get ahead. I've managed businesses, worked as a motivator and inspirational speaker and I can't imagine what it would be like to work with this woman. 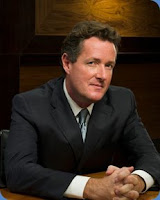 Piers, on the other hand, is a man who loves his family and has a great sense of 'self'. I know some people found him arrogant at times, but I have always admired him. Yes, he may cave in at times and react, just as many of us would do when contactly badgered. But he has a genuine goal to succeed for his chosen charity--the Intrepid Fallen Heroes Fund, which provides financial relief to families of United States military personnel lost in performance of their duty.

Congratulations, Piers, for a very successful slaughter and for ridding us of the wicked witch Omarosa. You have proven numerous times that you know how to get things done. It was great to see that you remembered to thank the man at the gallery for his contributions and it is impressive to see how many well-known people you know. That is a testament to who you are!

Now, Piers, I need you to call your friends, including Gordon Ramsay, and help me sell more books. :)

Posted by Cheryl Tardif at 7:44 PM

I missed the one episode that I wanted to see...Omarosa getting fired! I've told you before that I don't watch that silly show, but the writers strike got to me, too. The other night I came home, turned on the TV and saw just the ending of her walking to the car. I yelled at the TV and myself for missing it. What I wouldn't give to have that episode rerun, just to see her face when she was fired. I hope that Trace wins, he's a gentleman and gets the work done. OMG, I can't believe I'm actually talking about who I want to win a "reality" show. Time to mix up a margarita and toast to you, Cheryl!

Aw, Karen...I am so sorry you missed that episode. It was the best one EVER! I actually hooted and clapped when she got fired.

As for seeing Omarosa's face...hmmm...just picture a wide-eyed deer in the headlights as it gets mowed down.

Ok, maybe that was a bit too graphic, but you get the idea.

And yeah, like you I got suckered in during the WGA strike and now I feel compelled to see it to its bitter end.

I hope Piers wins. He's smart, savvy and knows how to get things done.

No...where are those margaritas, my friend??? You are going to share, aren't you?

Let's have one during the next CA! They'll show a preview of last week's show. :)

I agree with everything you just said. Omarossa was a backstabbing, despicable menace, and no person except the scum of the earth would sink so low to insult a man's wife and children. There is justice: Piers slaughtered Omarossa, and she was totally humiliated. She even sunk so low to call Piers a homosexual (Not that there's anything wrong with that... some people are, some aren't.) in a pathetic move to get him fired up. Piers didn't lose his temper, and even made Trump, Ivanka, and Donald Jr. laugh, with a hilarious kiss for Trace. Omarossa was finished then. Too bad her juvenile attempts to move up in the world by insulting others failed. There is justice in the world, and that may have been the best piece of reality TV I have ever seen.

I have got to agree with you there. I don't think any other reality show this season can come close to that grand slam. :)

Thanks for dropping by, Evan.

And if you like reading about TV shows and movies I have a new blog at www.filmclipz.blogspot.com. I've posted this same post about Omarosa there too, so feel free to copy and paste your comment there. :)