The Brave One Goes Bang Bang 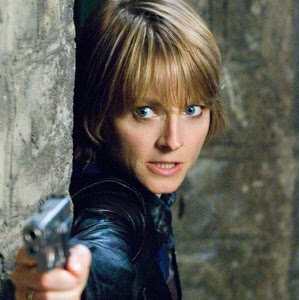 Note: No plot spoilers in this review, unless you haven’t seen the movie trailer.

Jodie Foster’s newest film venture is sure to bring her an award―or three. The Brave One is a fascinating character study and one that certainly allows for much discussion afterward. Foster (Silence of the Lambs) plays Erica Bain, popular radio host of a segment about New York called ‘Street Watch’. During the day, she takes to the streets, a recording device in hand as she records city noises, finding something interesting in the simplest sounds. Then in a semi-monotone voice, she talks about her own observations of city life on her show. Erica’s tone is mesmerizing and the audience is drawn in, comforted, made to feel safe, just as she feels. Until things change.

Erica’s fiancé David, played by Naveen Andrews (LOST), is an ephemeral yet key character. While walking their dog and discussing future wedding plans, Erica and David are brutally attacked by three taunting thugs. Erica wakes up three weeks later, battered and bruised, only to discover that the man she loves is dead and buried. But David haunts her, his touch and music ever close, making for some very poignant and sorrowful scenes.

Erica feels empty―dead inside. And the transformation begins. When asked how one recuperates from such terrible violence and loss, she says, “You don’t…you become someone else.” Suffering from a mild form of agoraphobia, she finds it difficult to leave her home. But when she finally does, she discovers that her once-loved city that seemed so safe is now something she dreads and fears. Every shadow, every person who brushes past her, every footstep behind her causes her to lose all security and faith. And justice is far from swift. So she buys a gun. This is the first pivotal, defining moment in the film, the point of no return where she takes that leap into the dark unknown.

Erica is shopping at a convenience store when a furious husband walks in and shoots his wife who is standing behind the counter. Erica is spurred into action when the man begins to hunt her down in the store. What’s a gal to do? The fact that she shoots the man isn’t surprising. You know that’s coming. But you don’t expect her to marvel at how easy it was. Her hands don’t shake. Why does killing seem to come so easy to her?

This one act of fury spawns a killing spree, and introduces Terrence Howard (Four Brothers) who plays Detective Mercer, a divorced cop who listens regularly to Erica’s radio show. His partner Detective Vitale (Nicky Katt) adds a bit of comic relief to this pensive, gritty movie directed by Neil Jordan. When Mercer finally begins to suspect who the vigilante is, the movie takes a twist, the ending not quite what many would expect and one that you’ll certainly remember.

But it is Jodie Foster’s portrayal of a woman who feels she has nothing left to live for that will stay with you. You watch her transform from a light-hearted, flirty, loving woman to a cold, calculating, hardened shell. Is there any redemption for her, any salvation? You’ll have to watch the movie to find out.

The Brave One reminded me somewhat of a novel I’d heard of recently. In author Lynn Hoffman’s novel bang Bang, a waitress who is against guns is devastated when a close friend is shot dead. She takes to the streets with a BB gun, targeting windshields of those who incur her wrath, especially those in the United Gun Association.

I find that when a story is really told from the perspective of the main character, we are drawn in much further, not only to the plot but to the emotions and motives. In my own novel Whale Song, I explored a flawed character that, much like Foster’s Erica Bain, has closed herself off to those around her after the tragic death of her mother. Death, especially a violent one, tends to do that to people.

As an educated society that has witnessed terrorism and an overwhelming daily diet of death broadcasted by our media, we can’t help but cheer these vigilantes. Certainly, none of us condone murder, but it’s in our human nature to yearn for the ‘bad guys’ to get what they deserve. That’s what made The Brave One so compelling and controversial. That’s what makes bang Bang a novel that the NRA might have an issue with. But it is the characters―flawed, defenseless, haunted, terrorized, grief-stricken―that bring these stories to life.

I invite you to check out The Brave One at your nearest movie theatre, and for those cold winter nights, curl up with Lynn Hoffman’s bang Bang and my bestselling novel Whale Song, which you can buy on Amazon’s Better Together program. All three explore strong women who have learned to fight back in their own way―one with a gun, one with a BB gun and one with the truth.

Cheryl Kaye Tardif is an Amazon bestselling author. Her recent release, Whale Song, has received rave reviews from Booklist, Midwest Book Reviews, Fresh Fiction and more, along with reviews from authors like New York Times bestselling author Luanne Rice. All of Cheryl’s novels have captured the interest of major film companies, and Whale Song is now in the hands of Hollywood producers and directors, as well as some highly acclaimed actors and singer-songwriters.