Author Chicki Brown gives us a sneak peek at her upcoming new release, A WOMAN'S WORTH

Today's special guest is author Chicki Brown, whom I've had the pleasure of doing a multi-author event with. Chicki has a new release out... 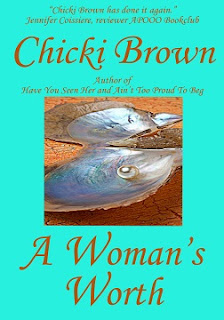 Gianne Marvray has been through the worst two years of her life physically and emotionally. After a battle with cancer and all it entails, she is finally ready to start living her life again. She wants to see new places, meet new people and experience new things, but she isn’t ready for the rollercoaster ride she’s about to embark on when she meets Las Vegas personal trainer and raw vegan foods advocate, Marc Stafford.

After four years, Marc comes home to Atlanta to attend a family celebration in one of his brother’s honor. He’s not thrilled about seeing his father, but he has promised his mother that he won’t throw off the family balance by being the only one of their six sons absent. All Marc wants to do is make an appearance at the event and spend a little time with his brothers. Little does he know that this is the night he will meet the woman who will forever change his life.

Gianne strolled through the room and looked for an unoccupied table. When she didn’t find a vacant table, she chose one not far from the door where only two people were seated. Neither of them seemed friendly, probably the reason they were sitting alone. Once she settled in the chair and smoothed her dress, Gianne busied herself with reading the short printed program placed above each water glass, which took all of five minutes. She closed her eyes and willed herself to at least enjoy the meal. When she opened them, she looked right into the watercolor gaze of the handsomest man she’d ever seen. And he was staring directly at her.

Not knowing what else to do, Gianne offered him a small smile, yet he just stood there appearing startled, which she didn’t understand. Just to be certain she was the object of his attention, she turned and glanced over her shoulder to see if anyone stood behind her. When she looked back, her movement seemed to stir him.

“Please forgive me for staring,” he said in a deep, rich tone that sent waves of warmth right to her core. “Have we met before?”

Although she tried, Gianne was unable to keep her gaze from traveling the length of his tall body from those incredible eyes to the long black hair that curled onto his wide shoulders and over the black designer suit that fit his lean, yet well-built body perfectly.

“I don’t think so. You must be one of the Stafford brothers.”

He moved closer and acknowledged the other two guests at the table for the first time with a smile and a casual nod before he extended his hand to her. “Marc Stafford. And you are?”

“Beautiful name. Very fitting.” He smiled, and an air of sensuality surrounded him. “Are you a friend of Vic’s?”

“Not really. I know him professionally.” No need to give him the gory details. And your brother, the fine surgeon that he is, made sure I never have any children of my own.

He lowered his gaze, and she knew he was admiring the cleavage showcased by the V in the front of her dress. “Do you mind if I join you? I’d rather not sit with the family.” He shrugged. “Long story.”

He set his glass on the table, pulled out the chair on her left and sat angling his body toward her.

“Dr. Stafford mentioned that he has six sons. Where do you fall in the lineup?”

“Charles and I are actually number three. We’re twins.”

“Really? Which one is he?” she asked, returning her gaze to the head table.

“The second one to my father’s left.”

She studied his brother from a distance then said, “Oh, yes. I see the likeness. It’s just your hair that makes you look different. Is that intentional?”

Marc chuckled. “No. It just took me thirty-five years to finally stop wearing the buzz cut my father always insisted on.”

She gave the shiny hair cascading onto the shoulders of his perfectly fitted suit an admiring glance. “I guess I’m sensitive to the whole hair thing, since mine is just starting to grow back.” She ran a hand over her head and Marc frowned.

Learn more about Chicki at:

Thanks so much for sharing my new release with your readers, Cheryl. :)