Count your blessings this Thanksgiving weekend 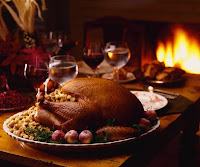 This Thanksgiving I am really counting my blessings, but most of all I'm thankful I'm here to celebrate another Thanksgiving with my family. A week ago, something could have changed this forever.

On September 30th, I was involved in a 3-car accident. A car slammed into my car and pushed me into the vehicle in front. It happened so fast that I didn't even realize at first that I'd been hit from behind. My heart raced and my hands shook as I tried to find my emergency lights.

I was the first one out of my vehicle. I went to the car behind me and discovered two girls a bit younger than my own daughter. The driver was visibly shaken by the accident. It was her first--and her first car. I felt very bad for her and was relieved that neither she nor her passenger were seriously injured--or worse.

Next I checked on the car in front of me. An elderly couple. No one hurt there either. They told me all they felt was a "bump" when my car was pushed into theirs. We checked their bumper and were stunned to find no visible damage. Yet the front end of my car had large scrapes and the hood was dented.

I went back to the girls and called 911. While waiting for the police to show, I noted the damage to our vehicles. The front end of the car behind me was sitting somewhat underneath the back end of mine, which was ripped off in places. My muffler was on the ground. Other parts dangled from underneath. The cars would have to be peeled apart.

I have no idea how long we were standing on the road waiting for the police to do what they needed to do. It's kind of a blur now. But after about 2 hours, the soreness began to creep into my body. Soft tissue damage and whiplash level 2. Not fun.

It's hard not to feel frustrated that this accident happened. The driver behind me wasn't paying close enough attention to the traffic in front. As a result, I'm suffering with pain and with the realization that my new Mustang convertible that my husband drove all the way down to BC to pick up has been damaged. We'll get it repaired, but it'll never be the same or have the same value. It was our first real luxury car and my birthday present. We'd worked so hard to get it.

And now Thanksgiving is upon us. I'm too sore to spend the day cooking and the thought of lifting a turkey or ham out of the oven makes me nauseous. So we're going out for dinner. Our anniversary is on the 11th. We'd thought about going somewhere for a few days to celebrate 25 years--our silver anniversary. Mexico maybe. But I'm too sore to travel or rush through airports. I'll admit, it really does suck that our plans have been cancelled.

But things could have been worse. Someone could have died in that accident.

It has left me very sore, but very grateful. No one was seriously hurt that day, though I'm sure that everyone involved has been somewhat scarred emotionally. It's not every day that you're faced with your own mortality. It's a huge wake-up call.

So count your blessings this weekend. Drive alert and drive safe! Don't do something that could cost a life. And be thankful for every day you wake up. Happy Thanksgiving!
Posted by Cheryl Tardif at 12:14 PM

Are you a month ahead of us? 0.o Thanksgiving isn't until November 11th! :) Canadian Thanksgiving?

Yes, in Canada we celebrate Thanksgiving on the second Monday in October. :-) In the US, it's on the 4th Thursday of November, I believe.

OMG, Cheryl! Thank GOD you and everyone else involved was okay. You truly do have so much to be thankful for this year.

Have a restful Holiday and take care of yourself.