My thoughts on the Kobo ereader 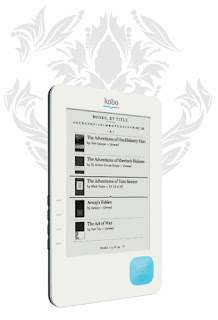 I was recently asked to give my opinions of the Kobo ereader on another blog, and I've decided to share them with you here. Since Kobo is a Canadian company and I'm from Canada, I am a bit biased. I really want this company to succeed; I was one of their first Canadian authors at the very beginning when they were known as Shortcovers. So I do have history with them.

But I'm also a Kindle fan and Sony ereader fan and others.

I recently bought a Kobo ereader. For a few reasons.

1. I want to give it to my mother for Christmas. She's an avid reader but not big on technology. I think she'll love the Kobo ereader because it's very simple to use and she won't have to pack 4 books when she travels. And it's a dedicated ereader; it doesn't have a lot of bells and whistles to detract from its purpose. My Mom doesn't need those bells and whistles. So for ease of use and practicality, the Kobo ereader scores a 5/5.

2. It was one of the least expensive ereaders--before the ereader price wars. However, now that other ereaders have dropped their prices, I think Kobo should follow suit. Their product is just too simple to compete, price wise.

There's also a second reason why I wanted to try it. I'm an author. I want to see what potential Kobo readers will be using, how my books will appear, what the readers' experiences will be. Again, for those who just want an ereader, the Kobo ereader is perfect. I believe it will especially appeal to those who are young (great kid's Christmas gift idea), or much older (60+) and those who aren't very techie.

It's unfortunate your experience at Borders wasn't a positive one. Here in Canada, we've had big ad displays advertising the Kobo ereaders, even in the Chapters bookstores that don't have them in stock. The staff I've talked to have all been excited, especially when I showed them my Kobo ereader. Some staff hadn't seen one yet, but most have some knowledge of the device.

I've even volunteered to go into my local stores and show customers my Kobo ereader, let them play with it. :-)

I've enjoyed the Kobo ereader. The update went fairly smoothly for me and I haven't had any major glitches, though I always expect them with new technology. But I'll be honest; I was one of the people who swore years ago I'd never read on an ereader. Oops...

Check out the Kobo ereader and be sure to check out their huge library of books (including my own) at KoboBooks.com.