Searching for Kinosoo, the Monster Lake Trout of Cold Lake 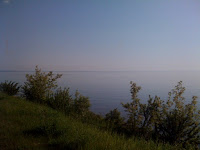 This past weekend, my husband and I spent 3 wonderful days in Cold Lake, Alberta--"Alberta's best kept secret", as everyone there will tell you. And it's true! It wasn't at all what I expected. It was spacious, lush, beautiful, charming, quaint, intriguing and liberating. Then again, why should I expect anything less from a place that spawned such legends as Kinosoo, the monstrous lake trout of Cold Lake?

At lunch time, Marc and I stepped aboard a speedboat captained by our B&B host's neighbor. Wilf took us out onto the lake, which at first glance made me think I'd somehow been transported to BC and was now staring at the ocean. And we set off in search of Kinosoo. 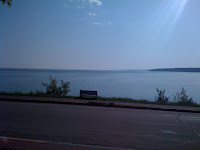 If you've read my novel Whale Song, you'll know that native legend fascinate me. I grew up on the Queen Charlotte Islands and often heard the stories of the Haida. One of my most loved characters is Nana, the native grandmother from Whale Song who tells such wonderful stories with moral messages and deep meaning. Cold Lake is surrounded by legend and the great lake trout Kinosoo is a large part of that.

Legend has it that a young Cree man set out in his canoe to meet his betrothed, who resided across the lake. While paddling, the young man heard a thunderous splash and Kinosoo appeared with its monstrous head and gaping mouth. The giant lake trout bit the canoe in half, and the young man was never seen again. Later, while his betrothed waited, the halves of his canoe were found, along with giant teeth marks etched into the wood. It was a long time before anyone tried crossing Cold Lake again.

People come from far and wide in search of the great Kinosoo. Fishermen dream of the day when they'll reel in the giant trout--if that's possible. Tourists strain eagerly, hoping to spot a giant head or tail in the water. 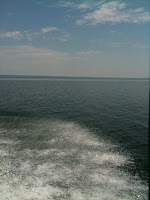 As we sped along in the speedboat, Marc and I saw huge pelicans and other birds. We saw a few boats carrying people with fishing rods and there were some brave souls swimming along the shores. But we never saw Kinosoo.

If you're an adventurous soul who loves the great outdoors, fishing, hiking, camping or staying in lovely bed & breakfast inns (we stayed at the lovely Bloom 'N Breakfast Inn with its gorgeous lake view), winter sports (it's a year round destination spot) check out Cold Lake, Alberta's best kept secret. You'll be glad you did.
Posted by Cheryl Tardif at 11:29 AM