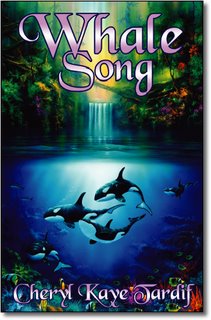 
I once feared death.
It is said that death begins with the absence of life. And life begins when death is no longer feared. I have stared death in the face and survived. I am a survivor who has learned about unfailing love and forgiveness.
I realize now that I am but a tiny fragment in an endless ocean of life, just as a killer whale is a speck in her immense underwater domain. I spent years fighting my fragmented memories, imprisoned by guilt and betrayal. Locked away in darkness, I learned lessons from Seagull, Whale and Wolf.
What I remember the most about my childhood are the happy times, the excursions in the schooner and the sunlight reflecting off deep blue water. I can still see in my mind the mist of water spouting from the surface and a ripple opening softly to release the dorsal fin of a killer whale.
Most of all I remember the eerie, plaintive song of the whale caught on the electronic equipment of the boat. Her song still echoes in my mind, like a long-forgotten memory...

Village of the Whales


Daniella Andria Rossetti was born and raised in San Diego, California. Her parents were immigrants from Italy who had moved to the United States after World War II. When she was eighteen, Daniella's parents moved again, this time to Vancouver, Canada. She took advantage of their move, left home and moved to Hollywood with hopes of becoming a famous actress. After numerous rejections and insulting offers from some sleazy directors, she gave up her stalled acting career to study art and oil painting instead.
Within a couple of months her work was shown at a popular art gallery, Visions, in San Francisco. It was there that she met Jack Richardson, a Canadian marine biology student. Within six months, Daniella had moved in with Jack--much to her parents' disapproval. Four months later they were married in a small church with Daniella's parents and a few friends present.
For the next three years, Jack and Daniella tried unsuccessfully to have a child. They had almost given up hope when they discovered that Daniella was finally pregnant. Six months into her pregnancy, Daniella miscarried. They were totally devastated.
Eight months later, Jack's stepfather and mother were killed in a car accident. During the reading of his stepfather's will, Jack discovered that he was the new owner of a rambling ranch home in Wyoming. Daniella was upset at leaving the bustling city of San Francisco for the wide-open plains near Buffalo until the curator of Visions, Simon McAllister, promised that she could courier her paintings to the gallery.
After a year on the ranch, Daniella couldn't imagine living anywhere else. Her work had thrived. Her paintings reflected images of country living, meadows and mountains. Then she was rewarded with unbelievable news. She was pregnant again! Nine months later, Sarah Maria Richardson weighed in at eight pounds, four ounces. At three months, I had thick black hair and dark brown eyes--and my parents doted on me.
When I was about six years old, my mother told me how she and my father had met. She told me how handsome he had looked the day he walked into the art gallery. She said she had fallen in love with him that very moment. It sounded like a fairytale. I knew my parents loved each other and that they would be married forever.


"Dad? Can I go outside?" I asked my father during breakfast. My mother was still sleeping.
"Sure thing, Sarah. Let's go for a walk."
My father and I strolled onto the deck, down the stairs and across the rocky trail to the beach. The sun gleamed off his blond hair, highlighting a few gray ones. At forty-one, my father was the most handsome man I knew. I loved him more than I loved anyone in the world--I idolized him.
He always made my mother and I laugh by imitating people at work. He often pretended he could understand the creatures of the sea and he would tell us what they thought of his co-workers. The whales didn't have many nice things to say about them sometimes.
I watched my father lean forward and pick up a rock. He examined it carefully with what my mother and I called his ‘scientific mind’. Then he skipped it across the water. I tried to mimic him, but my rock simply sank with a thud.
"Like this," he instructed, showing me how to select a flat stone and fling it towards the water's surface like a Frisbee. "You have to throw it hard but keep it flat."
I practiced skipping stones until I finally succeeded.
"There you go!" my father cheered, grinning proudly.
We followed the shoreline around a bend a few yards away from our house and I squealed with delight. The rocky shoreline disappeared and a sandy beach curved toward the water.
"A raft! Look, Dad!" I pointed to a floating raft anchored maybe fifteen yards out into the water. The bay widened and just beyond it, the ocean loomed.
"This is all part of our property," my father said. "It's safe to swim out to the raft, just don't go any further. Okay?" His eyes turned serious and dark.
I studied the raft and noticed a small island not too far from it. My father was staring at the island too and I wondered what he was thinking. It wasn't until after supper that he told my mother and me the story of Fallen Island.
"Last year the son of one of our neighbors tried swimming out to Fallen Island," he began quietly. "The story I heard was that the boy had challenged his sister to swim from the raft to the island but when she refused, he went anyway. Apparently he made it most of the way across." My father paused and I clung to my chair, waiting.
"No one knows if he got caught in an old fishing net that had been washed into the bay, or if he just got too tired. His sister tried swimming out to him but I guess she panicked and went back to the raft. Her parents found her an hour later, sitting on the raft, just staring at the island."
"Did they find him?" I asked hopefully.
My father shook his head and said, "Search teams dragged the bay but they never found his body. I heard that his sister went to the shoreline every day afterwards, hoping to catch sight of her brother because she believed that he was still alive. The boy was only fourteen years old."
"That's an awful story, Jack," my mother scolded. She turned to me, patting my back reassuringly. "Your dad never should have told you."
"There's a reason I did, Daniella," my father said seriously. He looked at me directly and said, "I want you to promise me that you'll never swim farther than that raft."
There were times when my father scared me. The intensity of his words combined with his piercing blue eyes made me swallow hard.
"Promise me," he repeated gently.
As I made that solemn vow, I reminded myself that promises were sacred, not to be broken. I knew that my father loved me and that he was only protecting me – or trying to. He would always be my protector.